What happens when the famous fairytale of The Ugly Duckling gets a TeenBook twist! She definitely doesn’t turn into a ‘beautiful’ swan! 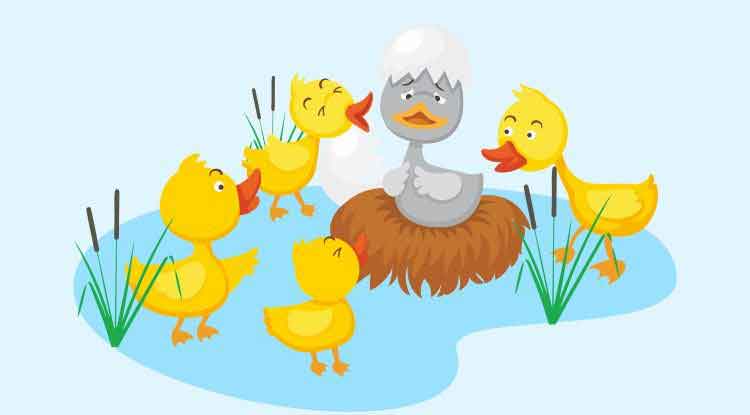 Once upon a time, a mama duck laid five eggs in a farm. Each day she longed for the eggs to hatch. On a fine hot summer day four of the eggs cracked and hatched little ducklings. Little ducklings quacked as they appeared out of the shells. The ducklings were tiny, with a stout body, small orange beak, short neck, fluffy yellow feathers, and orange webbed feet. Mama duck was so proud of her beautiful babies, she gave each one a loving kiss. But she saw that one of the eggs was remaining to crack. She waited patiently for it to hatch.

After three days the last egg finally hatched and came out an odd looking duckling. It was bigger than the other ducklings, it had a long neck, light brown fluffy feathers, a bigger yellow beak and was flat-footed. Mama duck and the ducklings looked at it in confusion. It looked nothing like the other four ducklings.

The next day mama duck took her ducklings around the farm, there was a cow tied to the pole of the shed. It looked at the mama duck and her ducklings and said, “Mama Duck your four little ones are beautiful but why is the last one so odd?”

Mama duck smiled sadly and walked ahead with her ducklings. Then they met a goat, it was lazily chewing the hay. It looked at the mama duck and her ducklings and said, “Mama Duck your four little ones are beautiful but why is the last one so odd?”

Then at last they met an Ox, it was wallowing in a puddle. It looked at the mama duck and her ducklings and said, “Mama Duck your four little ones are beautiful but why is the last one so odd?”

This time mama duck felt embarrassed. She kept the odd duckling away from the other ducklings. When they would go out to swim in the pond, the odd little duckling was left behind. It would try to swim faster to be with its family but because of its flat-feet it couldn’t do so. When the four ducklings were playing in the farm, they would not invite the odd duckling. Once a duckling said, “You don’t look like us.”

“You are an ugly duckling!” exclaimed another.

The odd little duckling was so hurt by the words of its brothers and sisters, it decided to run away. On the way the villagers and the animals looked at the odd duckling, some with pity, some with disgust, while some simply ignored it. Finally it arrived at a swamp on the outskirts of the village. He stood by the swamp lake and started singing a sad song.

There was a wise frog listening to the duckling’s mellow but sad song. It went to the singing duckling and said, “Oh dear duck! Why are you so sad?

The duckling replied sadly, “I am ugly, no one likes me.”

“Everyone is beautiful in their own way. Look at you, you sing so well!”

“Oh yes, you do. Would you like to learn how to sing well? I would love to teach you.”

“Yes I would love to learn to sing.”

Now each day the frog croaked with the duckling. From dawn to dusk, the duckling would work hard and practice singing with the frog. He brushed off all the insecurity and focused on singing. He felt confident. 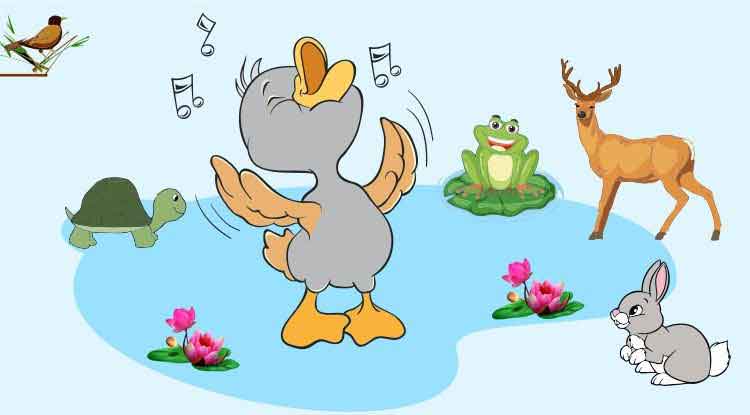 Soon, all the animals and birds of the swamp, rabbits, deer, tortoise, frogs, larks and sparrows, gathered to hear them. And like that all day the duckling sang melodious songs. Soon the duckling became a singing sensation at the swamp. At the end they cheered for the duckling. None of the animals gave a thought to the duckling’s appearance but only of its talent. His practice and hard work paid off and finally it found a home where it was accepted and loved.

How did you like the TeenBook #TwistInTheTale for The Ugly Duckling? Do you know this twist is actually inspired from a real life story? Like the odd duckling, even the famous pop-star ‘Lady Gaga’ was bullied, teased and humiliated in high school by her peers, even though she was a bright student and always bagged a lead role in school dramas.

This made her feel insecure. She focused all her energies in her music and today her music and talent has become her identity. She has taught us a very important lesson that our beauty lies in what we do and not in how we look. And don’t worry about ‘blending in’, because “you can’t blend in when you were born to stand out!”