Have you heard the story of Kubri Kubja – whom Krishna turned into a beautiful woman? Now read this story with a Teenbook Twist! 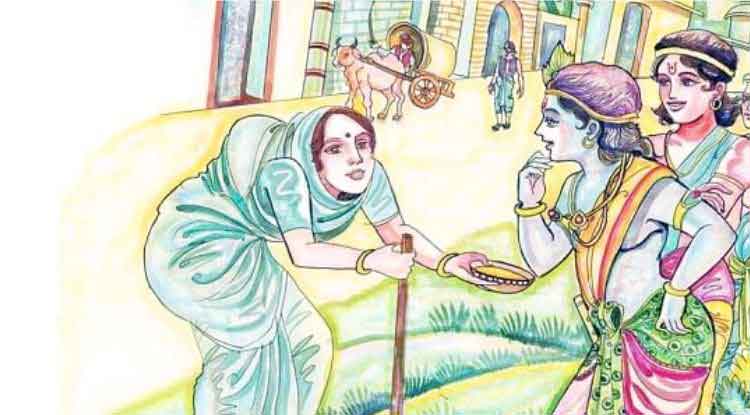 Once upon a time there lived a girl in the city named Mathura. She was clever, intelligent and cared for everyone. The girl loved picking flowers and making different types of pastes/perfumes with them. People from all over the world would come to her and say, “O Kubja, give us your flowers, perfumes and pastes. Applying them makes us feel so good.”

Kubja – that was the girl’s name. Why did she get this name? … She had a hump (kubad) on her back, so people started calling her Kubja. Just as a dark-skinned girl becomes ‘kaali’, someone with a short height becomes ‘naata’, someone tall becomes ‘lambu’ and every glass wearer is a ‘chashmish’. In the same way, the girl who sold the flower and fragrant pastes got the name Kubja.

But there was something special about this girl. She did not care what the world had to say about her. She would pick flowers of her choice, meet people and keep doing her work.

The don of Mathura

Kubja had a regular customer, a local don of Mathura, named Kansa. Though Kansa was quite arrogant and cruel, he was a patron of Kubja’s skills. He used to buy her fragrant oils every day. Kubja was also very punctual. The sun may rise late one morning, but she would always be on time. At six o’clock every day, she would reach Don Kansa with her oils and face packs.

One such morning when she was going to Kansa, as usual, a boy stopped her midway. “O girl, what is your name? Will you give me this sandalwood and oil? It smells very good and I am very keen to use it”, he said in a playful manner.

Kubja replied, “My name is Trivika but people call me Kubja. Now don’t waste my time. This stuff is not for you. I am taking it to Kansa. ”

The boy replied, “Trivika, my name is Kanha and I will pay you a higer price than Kansa. Anyway, Kansa is not a nice person, he harasses people.”

Kubja was shocked. It was for the first time that someone had called her by her real name. She said, “Kanha, you are the first person who has called me by real my name.”

Kanha said, “Trivika, I am also dark, but you did not call me Kalu. You called me by my name. So I also called you by your name. Also, let me say one thing, you are a very hard working and capable girl. You are as amazing as the facepacks and essential oils you make. And your name is equally nice”.

Trivika was shocked. “Am I really good?”

Kanha said, “Yes Trivika, just look at yourself from my perspective.”

On this Kubja whispered, “But this hump on my back…”

Kanha laughed and replied, “Oh, I didn’t even notice that, I was admiring the fragrance of the oils made by you. I was also thinking about how true you are to your work. Is it not six o’clock every morning that you are ready for work? And the hump, who cares…Look at how the tree in front of us – it is also bent, but it is happily growing and flowering. Trivika, if you measure yourself as per the standards of others, you will feel upset. It is important that we remain happy with ourselves. There is no one else like you. Your goodness is in your hard work and you are an inspiration on how to make a name for yourself through hard work.”

“The whole world calls me mischievous, makhanchor, but I know I am good at heart. And I help everyone. Don’t you agree!”

Trivika was happy. She had never thought like that before. Suddenly she felt really good about herself. This brought a smile on her face.

Seeing her smile, Kanha said, “Now tell me, will you give me this stuff?”

On hearing this, Trivika gave him all the oils and the packs and invited him to her house.

Kanha and Trivika always remained friends and some people say that later they dated each other too!

Real Story – This twist is inspired from the famous characters of Mahabharata, Trivika and Krishna. It is believed that when Krishna returned to Mathura for the first time, while visiting Kansa’s court, he met a woman named Trivika, whom the whole city despised because she was not very beautiful to look at and had a hump on her back. Trivika’s daily job was to apply oil on Kansa.

It is also said that Trivika was a nymph in previous life who had to spend such a life due to a curse. When Krishna met Trivika on the way, Krishna turned her back to a nymph. Trivika was so happy that whatever she was carrying for Kansa, she gave it all to Krishna. According to some versions of the tale, Krishna even married Trivika.