Gunjan, 14, came back home running and was scared when a group of boys passed inappropriate remarks on her shorts and legs. She thought it was her fault that she wore such clothes. But was it? Let’s find out in this week’s Curocity’s Central. 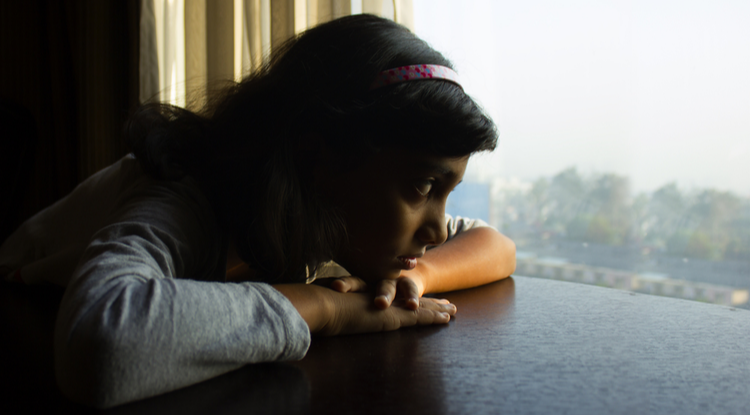 Shutterstock/Thesamphotography/Person in the photo is a model.

“Di, can I ask you something?” terrified Gunjan asked her sister after coming from the park.

Her elder sister Namita read the uneasiness on her face and sat next to her, “Are you alright? Did something happen?”

“I’m not sure if I should feel bad about it because it’s my fault that this thing happened…” Gunjan’s voice breaks as she tries to speak further.

“Arrey, are you okay? Tell me what happened. You know you can tell me anything”, said Namita as she held Gunjan’s hands with concern.

“Di, don’t scold me but when I was walking in the park, some unknown boys called me names and I felt uncomfortable. They were saying stuff like:

“Can your shorts be any shorter?”

“Di, I’m sorry. I should not have dressed like this I guess. It is all my fault! I don’t even know those boys personally”, said Gunjan.

“Oh my God! Gunjan, are you okay? Who were those boys? Were they from our locality?” Namita was shocked.

“I don’t know, di. I have seen them before but they didn’t seem like they would talk to me like this”, said Gunjan.

“Why are you blaming yourself? It is not your fault. You can wear whatever clothes you want. If people have a problem with that or do something wrong like the boys who catcalled you then it is their fault!” Namita affirmed.

“You know how much I like wearing those shorts but I don’t think I want to wear them ever again. It will remind me of what happened today”, Gunjan was aghast.

“I’m so sorry this happened, Gunjan. This is in no way your fault. Don’t put this on yourself. Unfortunately, this is something that happens very commonly with girls in our society”, her sister took a pause.

“Really? I am shocked”, Gunjan replied.

“What did you do when they behaved like this with you?” Namita asked.

“I don’t know. I was just terrified. For a second, I froze. I wasn’t able to understand what happened because it was so quick and as soon as I could, I ran away from there”, Gunjan replied.

“Why did they do this didi? I’m so scared to go back to the park now”, Gunjan said.

“Unfortunately, some boys treat girls like objects. They feel entitled to do something like this and the fear that women experience makes them assert their power even more. It is really sad that almost every young girl experiences this kind of fear in one way or the other”, Namita replied.

“Did it happen to you too?” Gunjan asked.

“Yes, many times. Not just with me but with many other girls and women. But you know the worst part, so many of us think it’s the girl’s fault”, Namita said.

“Yes, I too felt the same”, Gunjan added.

“If you walk alone, if you dress according to your choice, or even if you do something you like, society often holds the girls responsible for whatever happens to them but it is not their fault. It is the mindset of men who think that they can assert their power on women and treat them in whatever way they want”, her sister said in a disappointing tone.

What can be done?

“But didi, I am scared. What if this happens again? What will I do then?” asked Gunjan

“This seems like a very difficult question. In an ideal world, I would tell you to let them know that what they did is harassment and wrong. But doing so is scary. You don’t know what they might do. You don’t know how they’ll respond”, her sister said.

“If it is wrong then how could I leave it like this and not confront them? How will I take a stand for myself then?” asked Gunjan.

“I know it is really frustrating to be hesitant to do something you believe in. Doing this is usually only safe whenever you are in an open area and are accompanied by multiple people that are older than you who can help you out” her sister replied.

“Whenever you experience something like this, let someone more aware and older than you know about it. They’ll guide you and help you with what you can do. For example: you did a good thing by talking to me! As an adult, I understand how I can take up this incident in the locality”, Namita said.

Gunjan nodded and said, “I wish I could slap them though!”

“You shouldn’t do anything in aggression when you are in that situation. The logical thing you should focus on is to get yourself to a safe place like a place surrounded with a lot of people and contact your parents or someone older than you who you can trust. If you have a phone with you, dial 100 – the number for police”, Namita said.

“But I just went blank. Could not think of anything at all”, Gunjan said.

“Yes, I can imagine. It was your first time. But if it ever happens again, try to remain calm. Call for help. Shout – this makes them scared. Also, don’t get worried that your parents will scold you about going out alone or to a place without informing etc. It is still important to let them know because they might get angry only because they are upset that their child had to face something like this”, her sister replied.

“I will keep that in mind. But to be honest, I don’t like this didi. I don’t want to be in a place where I constantly have to look for clues to ensure my safety”, said Gunjan.

“It is completely alright to feel sad and frustrated about what happened to you today, Gunjan. It is not your fault and I support you no matter what”, her sister validated Gunjan’s feelings.