“But you were okay with it earlier”, Aryan told Sara when she refused to let him kiss her. He further argued by saying, “but you said yes last time!” This kind of conversation is quite common in relationships and among friends. But we get it. This is confusing. When is a yes and when can it become a no? And how do you understand a yes or a no in a new relationship? This yes or no is called consent and let’s understand it better in this week’s Curiocity Central. 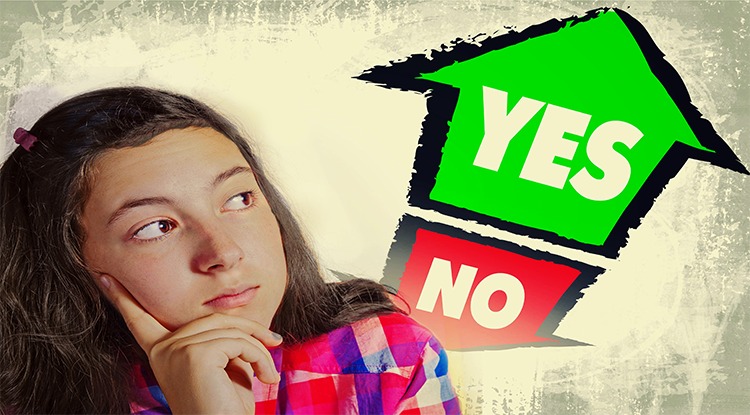 Consent is simply – saying yes. Agreeing to whatever is about to happen, explicitly. But saying yes when you mean yes is as important as saying no when you mean no. The power and ability to say no is important to the concept of consent.

Confusion in communication can lead to a lot of crossed wires. This is part of the reason why sometimes people cannot understand that no means no. Even when it does.  Especially when it does.

For understanding consent in a better way, do check out this cool video:

What’s that yes for?

Ok, so you have said yes to whatever is about to happen. But do you understand, really understand, what is going to happen? Let’s say your boyfriend/girlfriend wants you to try kissing. He/She thinks it will be fun and you decide to just go along. Well, that’s not consent or at least a complete one.

Because you don’t want to –  you don’t feel ready, but still say yes so they don’t get upset with you. Again, that’s not an act with explicit consent.

An important aspect of consenting to something is to really understand what’s about to happen and how it will impact you. This is why a yes from a minor for sexual activity is not considered consent in a court of law. Similarly, consent given under the influence of drugs or alcohol is also not valid.

Now, after you understand basic consent, there’s another concept that people need to grasp – the fact that consent can be withdrawn. Consent can flip to the other side at any point during a sexual interaction: at the beginning, middle, or end. You can back out at any time if you feel uncomfortable.

For example, let’s say you have seen a guy you like. You have been out on a few dates, have a lot in common and have spent time getting to know each other. You decide that you want to do more than just talk. You plan the day, place and occasion carefully.

So great, you’re all set, but something comes up. Something as simple as you just don’t feel comfortable with it anymore.

At this point in the interaction, if you want to back out, it is completely within your rights. If you don’t want to do anything physical with them, you don’t have to. In fact, you don’t even need a big reason to back out.

If you don’t want to, that’s a good enough reason. “But you said yes earlier”, is not an argument to force/coax/convince anyone. Anyone can change their mind at any time and it is ok, however frustrating or irritating.

Similarly, consent can also be withdrawn midway. If you are not okay with the situation anymore, whatever the reason, you can withdraw your consent. Take time however to explain the reason to your friend for a healthy relationship.

Also, it is best to not have any assumptions about what your gf/bf doesn’t want and instead, check in with them to make sure that you both are on the same page.

Boys too can back out

For boys, if, say, she is touching you, and you don’t like how she’s doing it, you can tell her to stop at whatever point she’s gotten to.

Just because you’ve started it, doesn’t mean you have to see it through all the way to the “end”, just because you think you’ve committed to the act (boys tend to take a lot more pressure about this).

No is an option, always

Saying no can be scary, uncomfortable, or simply very frustrating. This can lead to many people thinking they have to agree to get intimate with their partner, even when they don’t feel ready, especially to “make things worse”’. This is not true.

Saying no is everyone’s right. Yes, you heard that right. Whatever the status or nature of a relationship, you don’t have to consent to anything you don’t understand or aren’t comfortable with. It’s not always easy to say no but it is important to say it. Many forced acts can be checked with an emphatic no.

Photo: Shutterstock/Hrina/Person in the photo is a model, names changed.