You’ve heard your friends talk about these terms or perhaps in a recent movie you were watching. Or there could be some emotions you may be noticing yourself. So if these terms and words are playing on your mind, then read on. The term LGBTQIA stands for lesbian, gay, bisexual, transgender, queer, intersex and asexual. A bit heavy? Well, that’s why we are here to help you understand. Let us get to the details.

To understand LGBTQIA, you first need to understand the difference between sex, gender and sexual orientation.

Gender on the other hand depends on the way a person feels about themselves. It can be similar to the sex they were allotted at birth (male/female) or different from the sex allotted at birth.

Meanwhile, your sexual orientation depends on who you feel attracted to, as you develop romantic feelings. Confused, eh? Let’s break it down further.

Also, let’s check out this very informative and exciting video on Sexual Orientation, Behavior and Identity – below. Read the rest of the article below the video:

As we grow up, we may be attracted to people of different gender (boy-girl) or to people of the same gender (boy-boy and girl-girl). This is known as sexual orientation. As we grow we may begin to explore and understand our orientation. However, it may be quite later in life that we fully understand how we feel. So allow yourself enough time. Being straight, lesbian, bisexual, gay or asexual (more on these terms below) are all sexual orientations.

When a person feels emotionally, romantically and/ or physically attracted to a person of the opposite sex (female to male and vice versa), the are described as straight. A male and a female in a relationship will be described as a straight couple.

When a person is attracted to both men and women, they are described as bisexual.

When a person feels little or no physical attraction to anyone, male or female, they are described as asexual.

The term queer is used as an umbrella term for LGBTQI community or to describe the community of lesbian, gay, bisexual, transgender, queer and intersex community. For eg: We often say that many several members of the queer community participated in the pride parade.

A person born with ambiguous or undefined reproductive or sexual organs and they don’t fit singly into being female or male is known as intersex. Intersex persons choose what gender they want to be known with or none.

Questioning is the term used for someone who is still exploring/questioning their sexuality or gender. 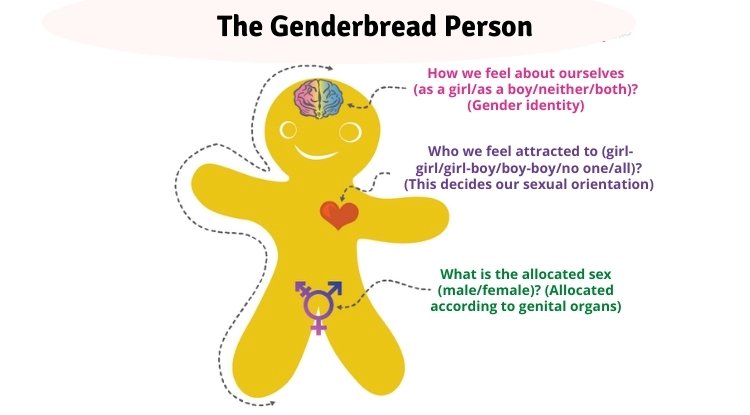